The mortgage market ended the year with approval numbers down on the previous month and lower than the 2017 average.

The latest Mortgage Monitor from e.surv, one of the UK’s largest residential chartered surveyors, reports there were 61,039 mortgage approvals (seasonally adjusted) in December 2017, based on Bank of England data.

This is lower than the 64,712 approvals in November, although there is traditionally less activity in December due to the Christmas holiday period. The six month average for approvals was 66,194 for the second half of the year.

The month-on-month decrease suggests that borrowers have yet to be spurred into action by the Bank of England’s decision to increase the base rate.

The central bank lifted the base rate in November 2017, meaning this data covers the first full month after the increase. While this is likely to have prompted homeowners to reassess their current deal and look to switch, the full effect may not be apparent until future surveys.

The proportion of approvals going to first-time buyers and others with smaller deposits increased compared to last month. Some 18.2% of all loans went to this part of the market in December 2017, one percentage point higher than the 17.2% recorded the previous month.

This is a dramatic improvement compared to a year ago. In December 2016 small deposit borrowers made up just 16.1% of the overall market.

“This survey shows that while the Bank of England’s decision to increase the base rate has prompted many mortgage borrowers to think about their current rate, this is yet to filter through to the approvals data.

“The base rate has increased but there are still many excellent value deals on the market. This means borrowers can still make a big saving by moving from a lender’s poor value Standard Variable Rate (SVR) to one of the better deals available.” 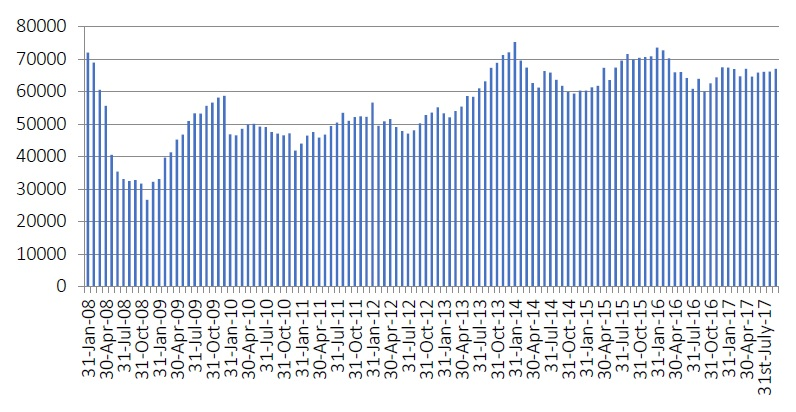 December saw the proportion of loans given to borrowers with large deposits decrease month-onmonth.

This month 35.9% of all mortgage approvals went to this part of the market – defined by this survey as those with a deposit of 60% or more. This is lower than the 36.5% rate recorded in both October and November.

The proportion of loans going to mid-market borrowers declined slightly, but is broadly in line with the rest of 2017. The survey found 45.9% of all loans were to this market segment in December, down slightly on the 46.3% found in November.

There was a significant increase in the number of small deposit borrowers in absolute terms, thanks to the overall size of the mortgage market increasing plus the higher proportion of these loans going to small deposit buyers.

“There was good news for first-time buyers and others with a small deposit as the number of these borrowers being approved grew substantially between November and December.

“However, the market remains dominated by those mid-market and high LTV borrowers who represent the safest bet for most mortgage lenders.”

The North West recorded a greater proportion of small deposit loan approvals than anywhere else in the UK in December 2017.

Three in every ten (28.1%) loans went to first-time buyers and others with small deposits during the month – more than any other region.

It was one of three regions to see more than a quarter of loans go to small deposit buyers.

The other two areas were Northern Ireland, where 27.7% of loans were to these borrowers, and Yorkshire, where the rate was 27.5%.

London remains the market most dominated by those with large deposits with 42.2% of approvals in December, up from 41.6% last month. Just 12.8% of London loans went to those with small deposits, down from 15.2% a month ago.

“Londoners already face a significant struggle building up a deposit of any kind, but the market is massively skewed towards those with a significant cash pile behind them.

“By contrast, the North West of England providers fertile ground for would-be buyers to get onto the property
ladder.”