Approval levels fall back in February

Approval levels fall back in February

February saw cold weather hit much of the UK and there was also a cooling of the UK mortgage market, with the number of application approvals falling. This month’s approvals are 1.25% lower than in January 2018 and down 2.6% compared to last February.

However, when broken down by customer type, there was good news for first-time buyers and others with small deposits. Between January and February, the proportion of loan approval going to this segment of the market increased from 21% to 21.1%.

Despite falling back this month, recent news has been positive and there was a strong performance in December and January, caused by the Bank of England’s decision to increase the base rate to 0.5% in November 2017. Since then many homeowners have chosen to remortgage to have security about their repayments.

While this increase is small, both figures are higher than the averages seen in the market recently. In December 2017, 18.2% of loans were to small deposit borrowers while the month before it was just 17.2%.

The latest Mortgage Monitor from e.surv, one of the UK’s largest residential chartered surveyors, shows there were 66,364 mortgages approved (seasonally adjusted) during February 2018.

“While the number of approvals fell slightly in February, this came after two stellar months for the UK mortgage market – prompted by a rise in the Bank of England base rate at the end of last year.

“Activity is expected to pick up again in future months as existing homeowners continue to feel the cost of increased mortgage payments in their pockets.

“Attention will also turn to when the next base rate rise takes place, with many experts predicting this for the late spring or early summer. However, with the recent Spring Statement announcing Stamp Duty relief has helped over 60,000 first-time buyers, market conditions are still very favourable right now for those looking to take their first steps.” 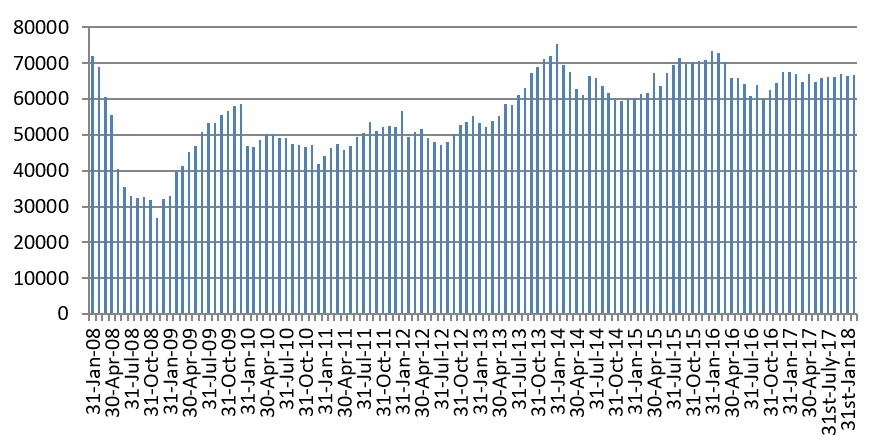 There was another fall in the proportion of loans approved to borrowers with large deposits – defined by this survey as those with a deposit of 60% or more.

The proportion of mid-market remained broadly in line with recent months. During February 45.8% of all mortgages went to these borrowers, broadly the same as the 45.5% found in January and 45.9% in December. The proportion of loans given to small deposit borrowers increased this month, as did the number of approvals on an absolute basis.

“This is a great time to buy if you’re a first-time buyer, but the favourable market conditions will not last forever.

“Mortgage rates are still at very low levels by historic standards, meaning that young borrowers can lock in and seal a great mortgage rate.”

Northern Ireland saw a greater proportion of loans to first-time buyers and others with small deposits than any other part of the UK.

In February 2018, 35% of loans in Northern Ireland went to this part of the market.

This was ahead of Yorkshire – where 31.3% of loans were to these buyers and the North West, where this figure was 29.8%.

These three areas, plus the Midlands (26.1%), were the only areas where more than a quarter of loans went to this part of the market.

This month, Northern Ireland was the only areas surveyed to have a greater proportion of small deposit borrowers than large ones.

The property market in London continues to prove the most challenging for people who don’t have a large deposit.

In London just 15.6% of all buyers had a small deposit this month, compared to 40% who had a large amount of equity.

Other areas which are dominated by buyers with larger cash piles were the South East (37.2% of all loans), Scotland (35.7%) and the South and South Wales (35.6%) regions.

“Buyers in London and southern areas typically have a much larger amount of equity than those in northern parts of England.

“These markets are all dominated by large deposit buyers.

“By contrast, the Northern Irish property market is home to a greater proportion of small deposit mortgage approvals than anywhere else. Coupled with the lower purchase price, this is a great place for first-time buyers to get onto the ladder.”